Recently, Jennifer Abruzzo, the General Counsel for the National Labor Relations Board (NLRB), released a memorandum representing the first significant federal regulatory guidance confronting the harms that intrusive electronic surveillance and management systems inflict on workers. Workers’ rights advocates have expressed increasing concern about these systems in recent years as companies deploy them to surveil and manage workers. Last year, CDT wrote a report on the impact of intrusive “bossware” systems on workers’ health and safety and called for regulatory action to help protect workers from the harmful effects of intrusive and nearly continuous worker surveillance systems.

Abruzzo’s memorandum focuses on companies’ use of surveillance technology to disrupt union organizing efforts, an issue that many labor and worker advocacy organizations have highlighted. Specifically, the memorandum addresses how intrusive and sophisticated electronic surveillance and management systems could interfere with employees’ rights under Section 7 of the National Labor Relations Act (NLRA), which protects employees’ right to cooperate and band together to improve working conditions or unionize. In the memorandum, Abruzzo said that she would urge the NLRB “to apply the Act to protect employees, to the greatest extent possible, from intrusive or abusive electronic monitoring and automated management practices that would have a tendency to interfere with Section 7 rights.” The memorandum represents the most significant step by federal regulators to date toward reining in the widespread, harmful use of surveillance systems.

The memorandum lays out a multi-pronged test for determining whether an employer’s surveillance and management practices violate the NLRA: 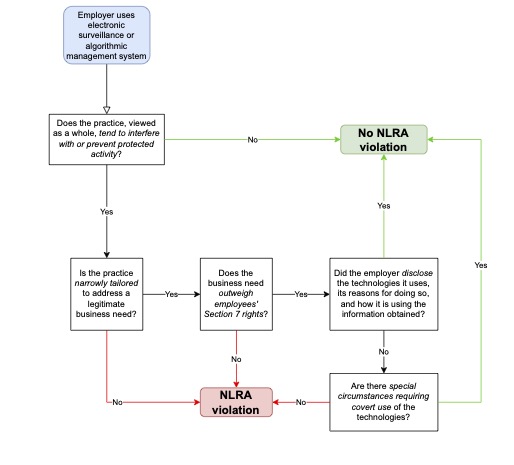 Abruzzo’s memorandum also lays out a number of specific categories of practices that she said could interfere with workers’ right to organize; we have added (in italics) hypothetical examples of existing workplace surveillance and management technologies that would fall under each category:

The memorandum is a significant milestone in the fight against the harmful effects of intrusive electronic surveillance and management systems. But the key advance will be if the Board adopts Abruzzo’s analysis and uses its authority to crack down on the uses of bossware and other intrusive surveillance and management practices that interfere with workers’ Section 7 rights.

Notably, Abruzzo closed the memorandum by emphasizing her commitment to “an interagency approach on these issues, as numerous agencies across the federal government” are examining the lawfulness of these workplace technologies. Such a multi-agency response will be essential because no single agency has the breadth of authority necessary to regulate the full array of harms that bossware and related technologies can cause workers.

CDT will continue to support such efforts, as it did last week when we submitted extensive comments–including comments on bossware and other workplace surveillance–in response to the Federal Trade Commission’s Advance Notice of Proposed Rulemaking on commercial surveillance practices. If the FTC and other agencies follow Abruzzo’s lead, the NLRB memorandum could–and hopefully will–be merely the first salvo in a federal response to employers’ increasing use of these exploitative technologies.