The oft-heated debate over the Digital Millennium Copyright Act’s (DMCA) Section 512 is nothing new, but this summer’s scorching heat might just bring the debate to a boiling point. The Copyright Office has finally released its long-awaited report on Section 512, the Senate is holding a series of hearings on the DMCA, and as EU members struggle to implement the Directive on Copyright, Germany is now considering upload filters, despite having promised not to do so. With all that’s happening, we thought a review of some current trends surrounding Section 512 reform in the U.S., and the larger global trend toward increased obligations for platforms, ISPs, and other intermediaries could help put it all in perspective.

At the Copyright Office

Section 512 contains provisions that create safe harbors for various kinds of online service providers, insulating them from any copyright infringements the users of their services may commit. These provisions establish the “notice-and-takedown” system that requires service providers to remove or block access to content after receiving notice that the post was not authorized by the content’s copyright holder.

In 2015, Then-Ranking Member of the House Judiciary Committee, John Conyers, asked the Copyright Office to conduct a study of the uses and problems with the DMCA’s Section 512. A few months ago, the Copyright Office finally released its study on Section 512 and, while it does not propose wholesale changes to the law, it does illustrate a disturbingly narrow viewpoint from the Office. The report’s main premise is that Section 512 has become unbalanced (mostly through judicial interpretations) and needs Congress to readjust and clarify a few provisions to set things right. The report claims that, because only one group complained about 512 (some rightsholders) and another group (online service providers or OSPs) said it was still working, these asymmetrical perspectives demonstrate an unbalanced statute. The report then goes on (and on and on) about all the injustices various courts have committed against copyright owners, and offers recommendations to Congress as to how it could address them. We urge Congress to approach these recommendations with caution and with the understanding that the Report does not accurately reflect stakeholders’ views on Section 512.

The Report Omits Two Key Parts of the Statute’s History

First, Congress was not trying to balance the interests of only two groups—rightsholders and OSPs— but of three, including internet users. Beyond the concerns raised by this omission, this view is troubling because it implies artificial and incorrect distinctions between stakeholder groups. Copyright is automatic, which means that anyone who snaps a photo, writes more than a few words, or records the sounds of their own voice is a copyright holder. Millions of such people make up the online communities that depend on OSPs in order to create, share, and profit from their expressions. By ignoring the diversity of copyright holders and the ways they use the internet, the report implicitly endorses the idea that all rightsholders are the same (as the major industry groups representing movie studios, music labels, and publishers) and that all agree on the adjustments that 512 needs.

In reality, the Venn diagram overlap of copyright holders and internet users is far larger than the report indicates and the ways rightsholders make use of the internet are more diverse than the retail-broadcast model used by larger industry players. For many creators, web platforms provide opportunities to distribute their works that would not have been available under the more traditional label-retailer model. The Re:Create coalition, of which CDT is a member, has published two studies on the New Creative Economy, highlighting just how lucrative the online distribution model can be for small, independent creators. At the same time, the internet’s two-way, multi-party communication enables creators to inspire and collaborate with each other across distance, time, national borders, and language barriers. By ignoring the diversity and openness of the internet as a creative forum, the report misses the bigger picture created by 512.

The Report is especially unsettling in that it lacks any substantial discussion of users’ and user-creators’ interests. With respect to user interests, the Report argues that OSPs are under a duty to passively respond to takedown notices, but it completely fails to discuss the effectiveness of counter-notices, or even acknowledge the high prevalence of abusive and erroneous takedowns. With respect to the interests of small and independent creators, the Report allocates a mere paragraph to the impact that an anti-competitive landscape will have on small creators’ ability to monetize their works.

The balance struck by Congress was not just about Section 512, but was far larger in scope, including the other major piece of the DMCA (Section 1201’s anti-circumvention rules) and the additional 20 years of protection granted by the Copyright Term Extension Act of 1998. This was the grand compromise: OSPs got Section 512’s safe harbors, copyright owners got Section 1201’s anti-circumvention provisions AND an extra 20 years of protection, internet users (indirectly) benefitted from 512 because it helped OSPs make user-uploaded contributions a legally viable option.

The Office argues that because the internet today looks different than it did in the 1990s, section 512’s current operation contravenes Congress’s original intent. Congress intended section 512 to withstand the ever-evolving digital landscape and to facilitate the development of the internet. The internet’s development into unanticipated arenas is not a sign that the statute is not working, but rather that it is working precisely as intended. Altering the statute to respond to today’s specific circumstances may lock in the development of the internet, contrary to Congress’s original intent.

What are the Office’s Recommendations?

In our comments on the study, we explained that, despite the difficulties that stakeholders on all sides of the issue face, Section 512 still reflects an appropriate balance of burdens and benefits. Altering that balance, especially to shift the burden of policing copyright onto service providers, would create undesirable incentives for service providers and ultimately reduce the ability of people to contribute and share their ideas and works online. In particular, we cautioned the Office against a “notice-and-staydown” regime, because it would push OSPs to over-regulate online expression using algorithms incapable of accounting for fair use. Although the Report does not endorse a staydown-like framework, it does recommend changes that could have similar impacts.

Take for example the Office’s analysis and recommendations for Section 512’s “red flag knowledge.” The Office acknowledges that 512 expressly bars an affirmative duty for OSPs to monitor for user infringements. Yet, the Office reads into 512 a nuance that does not exist: 512 bars a “general duty to monitor,” but creates a “limited duty of inquiry.” According to the Office, limiting red flag knowledge to specific infringements is tantamount to disposing of it altogether. The Office believes that a “limited duty to monitor” should be triggered based on the “general nature” of a site. This is a troublingly broad basis for an ostensibly limited duty, especially one that is supported by neither legal precedent, nor legislative history, nor 512’s plain language.

The Office also argues that OSPs’ flagging technology are a basis for red flag knowledge. This is bad policy even if you support the Office’s position. Holding OSPs liable for not taking down content they have flagged as potentially infringing does not incentivize them to develop more accurate monitoring methods, but rather to intentionally delay the creation and enhancement of such technologies to avoid liability. Disincentivizing better flagging technologies while holding OSPs liable for flags will deal a significant blow to users by hampering legitimate online expression.

On the Congressional side, Senator Tillis, Chair of the Senate Subcommittee on Intellectual Property, is poised to craft a DMCA reform bill by the end of the year. He has kick-started a series of DMCA hearings with a special focus on Section 512, though the series began before the Copyright Office published its long-awaited Report on Section 512.

If we take the latest hearing on Section 512 to be a representation of the larger debate, then Sen. Tillis’s is correct in calling 512 a “wonky topic.” Testimonies at the hearing were heavily skewed toward copyright owners, and in that sense, the hearing shared a core characteristic with the Copyright Office’s Report by focusing on copyright owners’ interest and ignoring users and user-creators. In their testimonies, copyright owners agreed with Senator Tillis and the Office that the DMCA needs an update. The Eagles’ Don Henley called the law “a relic of a MySpace era in a TikTok world.”

But unlike the Office’s Report, the DMCA hearings tend to focus on notice-and-staydown as a viable solution to an “outdated law.” But notice-and-staydown is not an up-to-date solution; it is wishful thinking based on technical misconceptions and without regard for fair use. We have previously noted that forcing service providers to monitor for potentially infringing content as part of a “notice-and-staydown” regime pushes providers toward a defensive position with regard to user uploads — better to block more posts, infringing or not, than to incur liability for copyright infringement. Shifting this burden would also push more service providers toward automated filter solutions, and as Sebastian Felix Schwemer noted in a recent article on EU’s Article 17, “we can only wish good luck to algorithms with performing a task that keeps legal scholars busy.”

In a recent article, Pamela Samuelson remarks that although content industries have always been dissatisfied with DMCA-like systems, these systems have so far been the global norm. In fact, similar OSP safe harbor provisions were recently imported into NAFTA’s progeny, the United States-Mexico-Canada Agreement (USMCA). Still, there are larger international and domestic trends pushing for increasing the obligations for OSPs in response to content industry pressures.

The DMCA Senate hearings and the Copyright Office’s report come on the heels of the European Union’s 2019 Directive on Copyright, which effectively created a duty to monitor for certain service providers. The jury is still out on the impact of those changes because no member state has so far transposed the Directive into national laws. The current state of implementation is uncertain and varied, especially due to Poland’s legal challenge over the Directive’s de-facto requirement of upload filters, but we expect the Directive will ultimately have a significant, detrimental impact on free expression in the EU.

As we have noted before, the domestic notice-and-staydown proposals involve the same technological and user right concerns as the EU Directive. Regardless of the outcome in the US, ultimately 512 must be construed in light of its basic purpose. As the Supreme Court has noted, “private motivation must ultimately serve the cause of promoting broad public availability of literature, music, and the other arts.” A notice-and-staydown system that renders the public domain, fair use, and all kinds of legitimate expressions unavailable fails to serve copyright’s basic constitutional purpose— regardless of changes in technology.

We are especially relieved that the Copyright Office still sees Section 512 as the best, workable approach to protecting copyright while also preserving the internet as a forum for free expression. However, we are deeply concerned about dismissive attitudes toward abusive notice-and-takedowns and the general disregard for the interests of users and user-creators. We are concerned that Congress may read the Report as a sign of consensus and move forward with legislation modeled after the Report’s recommendations. We strongly urge Congress to meaningfully engage all relevant stakeholders and to study the outcomes in the EU before changing the delicate balance achieved by Section 512. 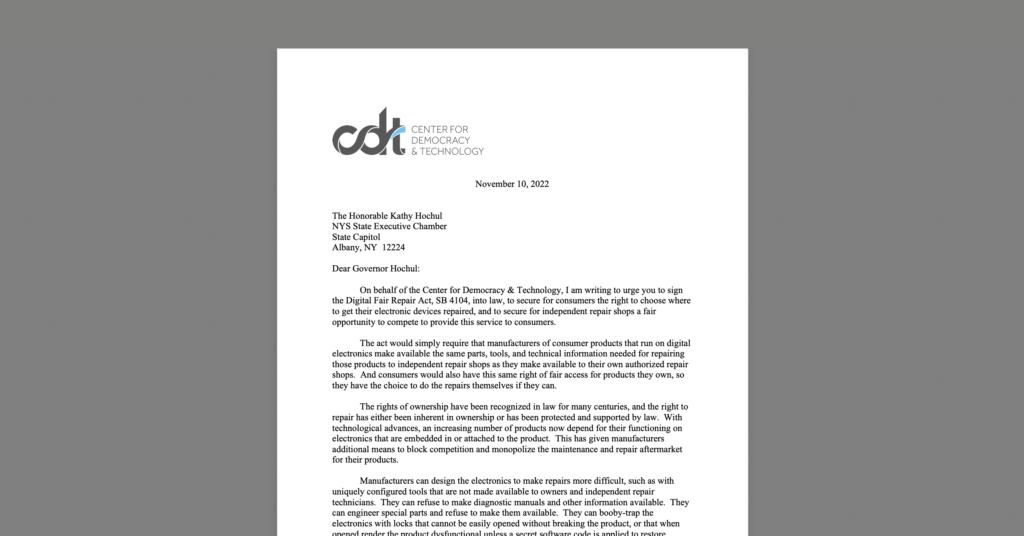