This is the June 2020 recap issue of CDT’s monthly EU Tech Policy Brief. It highlights some of the most pressing technology and internet policy matters under debate in Europe, the U.S., and internationally, and gives CDT’s perspective on them.

This month, CDT responded to the European Commission consultation on the “White Paper on Artificial Intelligence”, and filed an explanatory Supporting Document. CDT recognizes that well-designed AI applications can improve the speed, consistency, and accuracy of many types of decisions. However, applications with significant impact on people’s lives should be subject to robust safeguards and oversight. Likewise, people whose lives are impacted by partially or fully automated decisions should enjoy legal protection against erroneous or discriminatory outcomes. We caution policymakers to pay attention to the risks for free expression and access to information triggered by the use of AI-powered content moderation technologies. We also argue for a more flexible approach to risk assessment than foreseen in the White Paper. On remote biometric identification, we argue that use of these solutions in public spaces would violate fundamental rights protected by European law and encourage the Commission to issue guidance to that effect.

The European Commission has launched a public consultation in preparation for the Digital Services Act package. The questionnaire touches six areas that will be reflected in the legislative proposal: (1) seeking data regarding illegal and harmful activities online; (2) examining the relevance of the current liability exemption regime laid out in the e-Commerce Directive; (3) exploring ex ante rules for large platforms with significant network effects (the Commission runs a separate consultation inspecting this topic further in parallel); (4) collecting information on current practices and potential issues in the area of online advertising and smart contracts; (5) gathering views of self-employed individuals offering services through platforms (ride-hailing, food delivery, domestic work, etc.); and (6) focusing on governance and oversight mechanisms over digital services across the EU. Questions can be answered both by individuals or on behalf of organisations. The consultation is open until 8 September 2020.

On June 2, CDT filed a lawsuit against President Trump’s “Executive Order on Preventing Online Censorship,” signed May 28, 2020. Our suit argues that the Executive Order violates the First Amendment of the U.S. Constitution by curtailing the constitutionally protected speech of online platforms and individuals. As CDT President & CEO Alexandra Givens said, “The Executive Order is designed to deter social media services from fighting misinformation, voter suppression, and the stoking of violence on their platforms… CDT filed suit today because the President’s actions are a direct attack on the freedom of speech protected by the First Amendment. The government cannot and should not force online intermediaries into moderating speech according to the President’s whims. Blocking this order is crucial for protecting freedom of speech and continuing important work to ensure the integrity of the 2020 election.”

CDT and 11 other civil society organisations sent an open letter to Members of the Telecommunications Council, European Commission Executive Vice-President Vestager, and Commissioner Breton ahead of the 5 June Telecommunications Council. The letter stresses four key priorities for protecting fundamental rights and freedoms in the forthcoming Digital Services Act: (1) preserve the fundamental principle of limited liability for user-generated content; (2) maintain the prohibition on general monitoring obligations; (3) create a harmonised, transparent, and rights-protective framework for notice-and-action for illegal content; and (4) establish minimum requirements for meaningful and robust transparency mechanisms for both Member States and online platforms. Similar points were raised by the Digital9+ group of EU Member States in a recent discussion paper. The groups behind the joint letter will continue engagement with European Commission officials responsible for the DSA process.

German lawmakers have adopted changes to the NetzDG social media law that raise serious free expression and privacy concerns. Previously, social media networks were already required to assess and delete potentially illegal content under strict deadlines. Under the new rules, however, networks will have to proactively report such content to law enforcement and disclose user data such as IP addresses and port numbers. Social media platforms are de-facto becoming deputies of law enforcement. The reform states that users have the right to object to the deletion of their content, but their data will already be sent to the police. The data will be collected in a “suspicion database” of people whose content has been flagged and reported, but may well be entirely lawful. This is a prospect that is likely to have a chilling effect on online speech and debate – which seems to be the intent behind the initiative. The law will have to be approved by the Bundesrat, Germany’s upper house of parliament, and is scheduled for vote in September.

On May 13, French MPs adopted a strict new law to combat “online hate speech”. The legislation requires major online platform operators to remove within 24 hours of notification content that, according to the notification, results in discrimination, hatred, or violence; denies crimes against humanity; or contains aggravated insults, sexual harassment, or provocation to or glorification of terrorism. Refusal to remove notified content within the time is punished fines of €250K for natural persons and €1.25 million for legal entities. In December, CDT and other free expression groups wrote to French lawmakers raising a series of free expression concerns with the law. Now, the French constitutional court has ruled that a substantial part of the text is not compatible with the French constitution. The court argues that the infringement of freedom of expression and communication would be disproportionate due to the lack of sufficient safeguards. Furthermore, several provisions impose impossible constraints on all publishers and hosts and, in so doing, infringe the principle of equality before the public authorities. This is likely to impact the ongoing discussion on the Digital Services Act.

Webinar Series: COVID-19 Contact Tracing Apps in the U.S., EU and Asia
On June 10, CDT hosted one of a series of webinars on technology policy responses to COVID-19, “COVID-19 Contact Tracing Apps in the U.S., EU and Asia”. CDT’s Greg Nojeim gave an introduction of decentralized Bluetooth-enabled contact tracing technology based on the Apple/Google API, and described some approaches to contact tracing in the U.S. Digital Asia Hub’s Dev Lewis explained the lessons learned from Singapore’s experience with Bluetooth-enabled contact tracing and how its experience differed from more intrusive approaches used in China and India. Mozilla Foundation’s Frederike Kaltheuner explained the debate on use of centralized versus decentralized contact-tracing apps in Europe, as well as the problems that arise for apps that rely on centralized data storage with which the Google/Apple API can’t be used. If you are curious about it, you can watch the webinar here. If you’d like to participate in future webinars in this series, reach out to us at [email protected].

It’s Summer, and Copyright Reform is in the Air 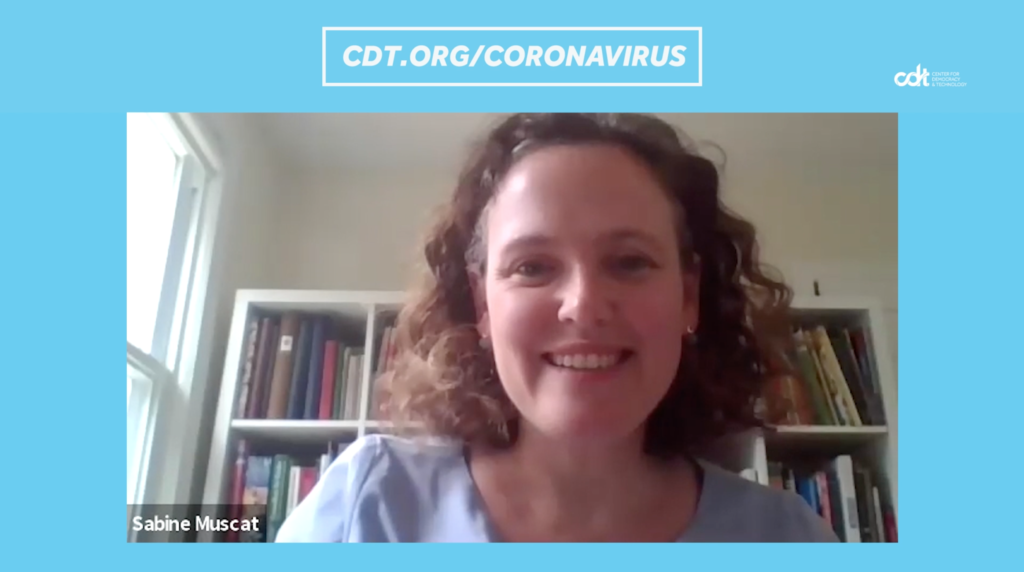