The debate on antitrust reform could not be more current in both Europe and the United States. As legislation on both sides of the Atlantic aims to regulate large technology platforms’ powers over online commerce, the platforms are pushing into a new market not yet a core part of the debate: the market for financial services. Based on their AI capabilities and large stores of consumer data, tech platforms could experience rapid growth in this sector, perhaps even coming to dominate parts of it. This leads us to ask: What role can antitrust play in this regard? And how can the forthcoming European and potential American laws fill this role?

Large online platforms increasingly serve as intermediaries between financial institutions and consumers, or as providers of analytical tools into which users upload their financial activity. As such, Amazon, Facebook, and Google are all active in facilitating loans to small businesses, while Amazon and Apple also engage in consumer lending through branded credit cards. In addition, Apple recently announced that it will handle lending for its “buy now, pay later” service itself – a divergence from the usual practice of having banks underwrite such loans. Additionally, Google’s “Pay” app encourages deep integration of third-party bank accounts, with Google providing extensive analytics of financial movements.

Predictions about large tech platforms’ continued rapid growth in the financial services sector are based on two considerations. First, the platforms can easily integrate new product offerings into their existing infrastructure, directly targeting large amounts of pre-existing users effortlessly. Google and Apple Pay, for example, are products that take advantage of such infrastructure. Second, the platforms may be able to beat traditional banks on the merits of some of their banking products. For example, the platforms will likely be able to outperform banks in calculating financial risk. Among financial products, lending products are especially risk-dependent, and platforms thus may have specific competitive advantage there.

The platforms’ advantages in risk calculation stem from both their extensive knowledge of individual users and their “big data” capabilities. On the individual user side, they benefit in their risk assessment from the fact that, often, users will rely on various offerings run by the same platform: cross-referencing user data from various services will often yield a picture more complete than what a bank can create – which, after all, mainly offers products in a few select sectors. Similarly, platforms’ possession of “big data” contributes to their potential competitive advantages in lending: From accumulated search queues in Google’s case to sales and spending records for Amazon, the large tech platforms control extensive datasets on users’ economic activity. Coupled with their advanced AI capabilities, this equips the platforms with an exceedingly precise understanding of market and consumer behavior. The result is an advantage in the assessment of the feasibility and risks inherent to loan-financed endeavors – and an ability to predict user behavior based on data on comparable users.

At all of this, the platforms are best with regard to those users that use them the most. This group comprises both platforms’ end-users and small-and-medium-sized enterprise (SME) users – the latter being much more likely than large companies to make use of Big Tech’s infrastructure rather than building their own solutions. In lending products for consumers and SMEs, the tech platforms’ competitive advantage over traditional banks is consequently the largest. This is therefore the relevant financial market in which tech platforms would seem most likely to focus their market entry.

In consequence, what currently are first steps into consumer and SME lending might quite rapidly grow into substantial competitors to traditional banks in this sector The likely result of such a process, at least initially, would be more choice, lower prices, and increased innovation in the markets for both consumer and business lending. At first, such developments would likely be most noticeable with regard to particularly risky loans. These are generally loans made to customers less well-integrated into the banking system for whom banks have greater difficulty calculating financial risk – customers lacking credit histories, credit scores, or basic documentation. Accordingly, some of the population groups with the least financial means currently face among the highest costs in accessing capital, or are outright excluded from access. Thanks to the tech platforms’ data capabilities, they may be able to overcome the information gap underlying this barrier. Accordingly, the entry of tech platforms into the lending market could make the starkest and most immediate difference for low-income individuals and business owners.

Preliminary evidence suggests that tech platforms’ data advantages apply across the board of the consumer and SME lending market. The platforms would thereby could also be able to outprice traditional banks across the remainder of this market – the difference being that price gaps may not be quite as pronounced here. Rather than new products being created, established products could become cheaper for existing customers. Succumbing to competitive pressures, traditional banks could be forced to match such lower pricing over time.

These developments would be very much in line with the goals of competition law. In fact, tech platforms’ push into this market may be seen as a real opportunity: The financial sector is not only entrenched in its position by the need for high-quality consumer data, but also by high capital requirements difficult to meet for most new market entrants. The big tech platforms are among the few players that can access both – and are therefore some of the best prospective candidates for enhancing competition in this sector.

Ultimately, however, the platforms’ data capabilities might tip the competitive scale so far in their favor that they could become dominant players in those lending markets. While these considerations are hypothetical for now, they are based on predictions that stem from, among others, experts at the Bank for International Settlements – a conglomerate of the world’s major central banks. Should tech platforms’ financial offerings indeed gain market power, the advantages for these financial services markets that would result from the platforms entering as competitors could be lost. Instead, product prices could increase, with innovation potentially slowing or halting. And because lending products are those in which traditional banks currently enjoy the highest profit margins, their displacement by tech platforms in the lending sector could force banks to offer worse products across the remainder of their product selection, which may currently be subsidized by lending revenues. Absent appropriate policing by competition authorities, the overall outcome of this process might consequently be worse than the status quo.

Beyond direct effects on the lending market, however, large platforms’ entry into the sector also could have broader implications for competition. User financial data, access to which goes hand in hand with entering the fintech market, is a particularly valuable data category that, in a feedback loop, could boost the platforms’ data advantage across their entire product range. As a result, this could further entrench the platforms’ existing powerful market positions – a concern recently voiced by Federal Trade Commission Chair Lina Khan and Consumer Financial Protection Bureau Director Rohit Chopra. Today, data-induced market power is already visible, for example, in Google Search. With the platforms’ push into fintech, lending may become an additional area of market power.

In light of these potential anticompetitive effects, it seems natural to ask: should competition law play a role in regulating the underlying developments? Neither the accumulation of data nor the gaining of a dominant market position is by itself unlawful under current antitrust laws. Seeing the large tech platforms’ exceedingly powerful role in contemporary online commerce, however, the discussion on tech-specific antitrust reform has gained much traction in both the US and EU. At this point, the EU’s Digital Markets Act (DMA; all following references to DMA articles are accessible through this link) has been adopted, whereas the destiny of a U.S. bill is less predictable. More so than current US proposals, the DMA contains a series of novel provisions specifically aiming at directly lessening data-induced competitive advantages.

At its core, the DMA aims to regulate tech platform’s “gatekeeper” powers – powers they hold over products such as Google Search, the Amazon Marketplace, or the iOS App Store, which are important bottlenecks for other businesses in reaching final consumers. The law obliges gatekeepers to grant third parties access to such platforms on fair terms (Art. 6.12); it also obliges them not to preference their own products over third-party offerings (Art. 6.5). Notably, the DMA also requires gatekeeper platforms to share with business and end users such data that those users generate in their interaction with the gatekeeper platform (Arts. 6.9 et seq.).

Moreover, the DMA prohibits gatekeeper platforms from cross-using personal data derived from across various offerings when competing against third-party businesses (Arts. 5.3 et seq.) In the lending market, this would mean that platforms could not actually take advantage of their pre-existing datasets on users in calculating financial risk, thus neutralizing a key competitive advantage. The provision, however, has one catch: it prohibits such cross-use only absent user consent. Such consent is to be obtained under conditions equivalent to those currently governing consent under the EU’s GDPR. While statistics on the matter are not excellent, they suggest that up to 90 percent of users may agree to online tracking in answering the typical GDPR prompt. Should the result be similarly high for cross-platform data processing, the provision’s effects might be quite limited.

Nonetheless, these provisions in the DMA have the potential to effectively address platform advantages that arise out of the platforms’ specific data on individual users. They do not, however, address the trickier issue of a platforms’ more general “big data” advantages. As such, the platform is still the only player with access to all the accumulated industry and consumer data it has accumulated as gatekeeper. How vital this latter dataset is to financial risk calculation relative to individual users’ personal data remains to be seen in practice. In theory, however, it will be much more granular and comprehensive and thereby likely to outpace any individual users’ data under most circumstances.

The DMA addresses these types of “big data” concerns to some extent. For example, the law obliges search engine operators to make available, on fair terms, data derived from search to competitors also operating search engines (Art. 6.11). This approach makes data an “essential facility” – a non-duplicable ingredient so vital to competition in certain markets that a business controlling it is under an obligation to share it with competitors, if practically feasible. This provision consequently aims not only at regulating gatekeeper behavior but at breaking gatekeeper power itself.

Given that the same data dynamics underlie both the original gatekeeper market and adjacent markets, the proposal’s logic could similarly apply to other data-intensive products offered on and by gatekeeper platforms, such as the lending market. Here, should tech platforms emerge as dominant players, the aggregate industry and consumer data would have facilitated their rise and might be subject to a fair sharing obligation. Alternatively, it might be possible to prohibit gatekeepers from cross-using non-personal data for new products similarly to how the DMA restricts the cross-use of personal data. One downside of the non-use approach would lie in the difficulty of policing it. On the other side, data-sharing obligations may entail privacy concerns.

While the DMA, under its current scope, would actually not immediately apply to lending services, its two approaches to dealing with data advantages – non-cross-use of personal data and sharing of industry data – might turn into highly informative blueprints for antitrust’s treatment of data-induced market advantages beyond their specific areas of application. Large-scale real-world studies on the economic effects of either of these novel approaches are limited, but if either or both of the DMA’s data provisions for online gatekeepers are indeed able to foster the emergence of competition, then those approaches might be expanded into additional sectors in which gatekeepers prove to hold data advantages, including potentially the lending sector. 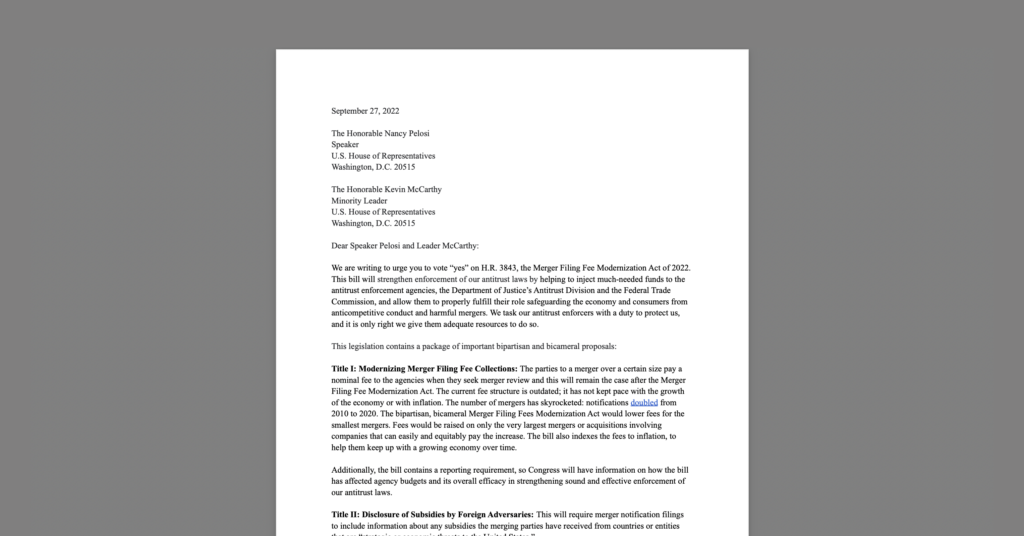 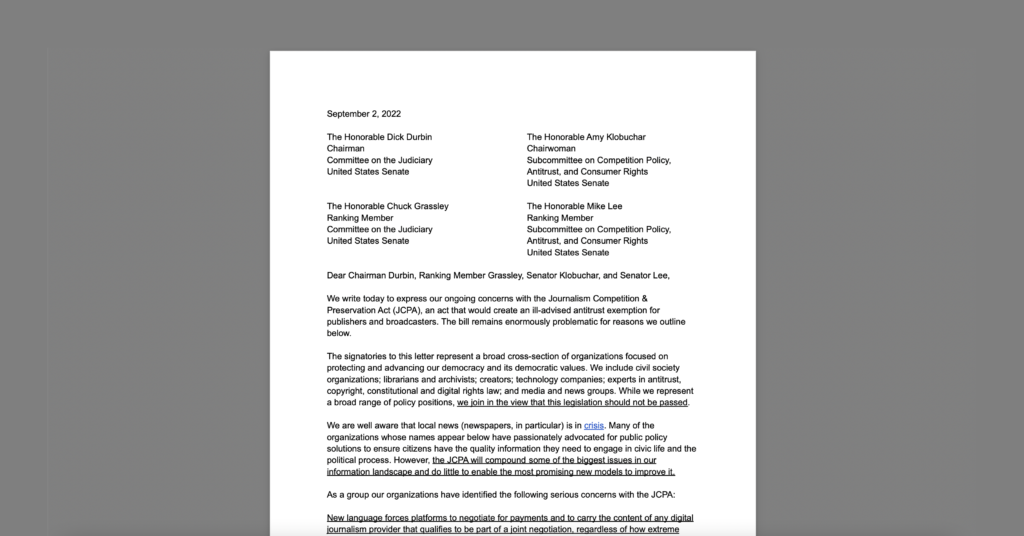