Last month, CDT’s Executive Director Leslie Harris took to the stage at the Personal Democracy Forum conference in New York to share a hopeful vision: that the powerful moment when the Internet rose up to stop the SOPA bill could be catalyzed into a broader, lasting political movement for Internet freedom. As she said then,

Something profound happened during the SOPA uprising. But if we are going to get from a moment to a movement, our first task is to knit together a common narrative that will bring our stories together into a richer more inclusive whole…. We have to set out a positive vision for the Internet and an agenda that captures the imagination of the electorate, one in which they can envision their future and that of their children.

Even as she spoke, many of the groups and individuals that helped stop SOPA were in the midst of meeting to discuss, draft, debate, and ultimately agree upon basic principles that could serve as a compass and a rallying cry for the emerging net freedom movement. CDT was proud to be a part of that process and is honored to join with many dozens of allies—organizations and individuals, old and new, domestic and international—in sharing the result, posted this morning to the new site www.internetdeclaration.org: 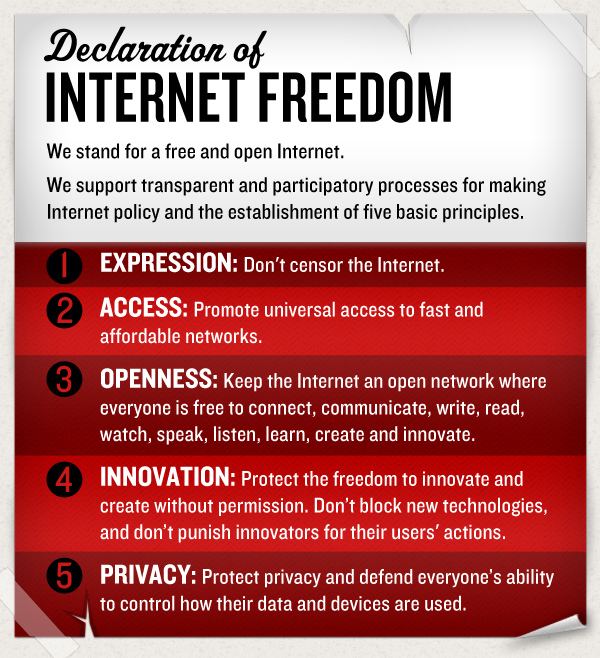 CDT is pleased to be one of the many signatories to this declaration, the five core principles of which are consistent with the values that CDT has promoted for nearly twenty years in its ongoing mission to “keep the Internet open, innovative, and free.” The Declaration celebrates and seeks to protect the core features of the Internet that have made it such a powerful global platform for free expression and innovation, the same features we recently outlined in the wake of the SOPA debate in our paper “What Every Policy Maker Should Know About the Internet”: open, decentralized, and interoperable, with no gatekeepers.

We and the other signers support open and transparent processes for making Internet policy, in contrast to the secrecy that has surrounded the ACTA process and the ITU process. We have long fought to protect online Expression against censorship, from the foundational battle and victory against the Communications Decency Act—notably, the 15th anniversary of the Supreme Court decision striking down that online censorship law was last week—to our recent victory over a CDA-like law in Utah, to new challenges to online speech like the “Right to be Forgotten” proposal in Europe.

We’ve also promoted universal Access to fast and affordable networks, be it through our work to stop government-mandated filtering of constitutionally protected speech in libraries and thereby help to prevent a “digital divide” between those who can afford an unfiltered Internet and those who have to rely on the library, or through our defending smaller rural ISPs against expensive tech mandates such as data retention requirements, or by defending the Internet as we know it against a new and radical proposal at the ITU to layer new costs onto the transmission of data between countries.

We’ve sought to maintain the Internet’s Openness by supporting Net Neutrality, pushing for open technical standards, and opposing SOPA’s threat to undermine the Internet’s fundamental technical architecture through measures such as domain-name filtering. We’ve long fought to protect online expression and Innovation by helping to establish and defend strong intermediary liability protections that, by “Shielding the Messengers”, work to protect user-generated content against censorship and foster the growth of UGC platforms. And we’ve consistently fought to protect your Privacy, pushing for reform of electronic privacy laws as part of our Digital Due Process coalition, working to put reasonable limits on the information that companies can share in the name of cybersecurity, participating in the development of the Do Not Track standard, or consistently pushing for baseline privacy legislation.

In sum, we—like the many other signers to the Declaration—believe in these five basic principles, and believe that they are worth fighting for. We hope that you’ll support them too, by lending your organization’s support at www.internetdeclaration.org, or, if you’re an individual, participating in the calls to action organized by other signers such as Access, Credo, the Electronic Frontier Foundation and Free Press.

More than signing onto these principles, though, we hope you’ll engage with them: discuss them, debate them, add or subtract to them, modify them, remix them, make them your own. These principles aren’t meant to be the last word on what Internet freedom is or should be, for us or for anyone else. Instead, given the participatory nature of the Internet, we and the other signers are hoping that the principles will jumpstart a much broader conversation with the online public, involving feedback and refinement from the massive community of Internet users who have shown a willingness to take a stand on behalf of the open Internet. You can start by joining the conversations about the Declaration and interacting with its text at reddit, Step2, Github and Cheezburger, and by using the hashtag #netdeclaration when you join the conversation on Twitter.

We don’t want to control the conversation, nor could we if we wanted to. It’s on the open Internet, now, and that means anyone can join in the dialogue. But that will only remain true if we all work together to keep the Internet that way: open, innovative, and free. So join us and declare your support for Internet freedom today.

Save Open Technology, Save the Internet