Jurisdictions across the country are putting newly-purchased voting equipment into service in the ramp-up to the 2020 Elections, some of which start in just four months. Just last week, I had a chance to witness firsthand the use of new VotingWorks technology, and left feeling optimistic about the possibility of more secure voting across the country.

I traveled to Central Mississippi, the kind of place where the train comes through town once a week and everyone nods hello as you’re walking down Main Street. It’s also the kind of place where a few hundred voters experienced the latest innovation in voting technology developed by VotingWorks. The start-up worked with Choctaw County Circuit Clerk, Amy Burdine, to pilot a new combination of ballot marking devices (BMD), ballot printers, and tabulation scanners to replace the years-old Dominion AccuVote TSX paperless DREs and AccuVote OS scanners.

Through the VotingWorks system, the voting process consisted of four basic steps:

Try a simulation of the BMD experience for yourself. 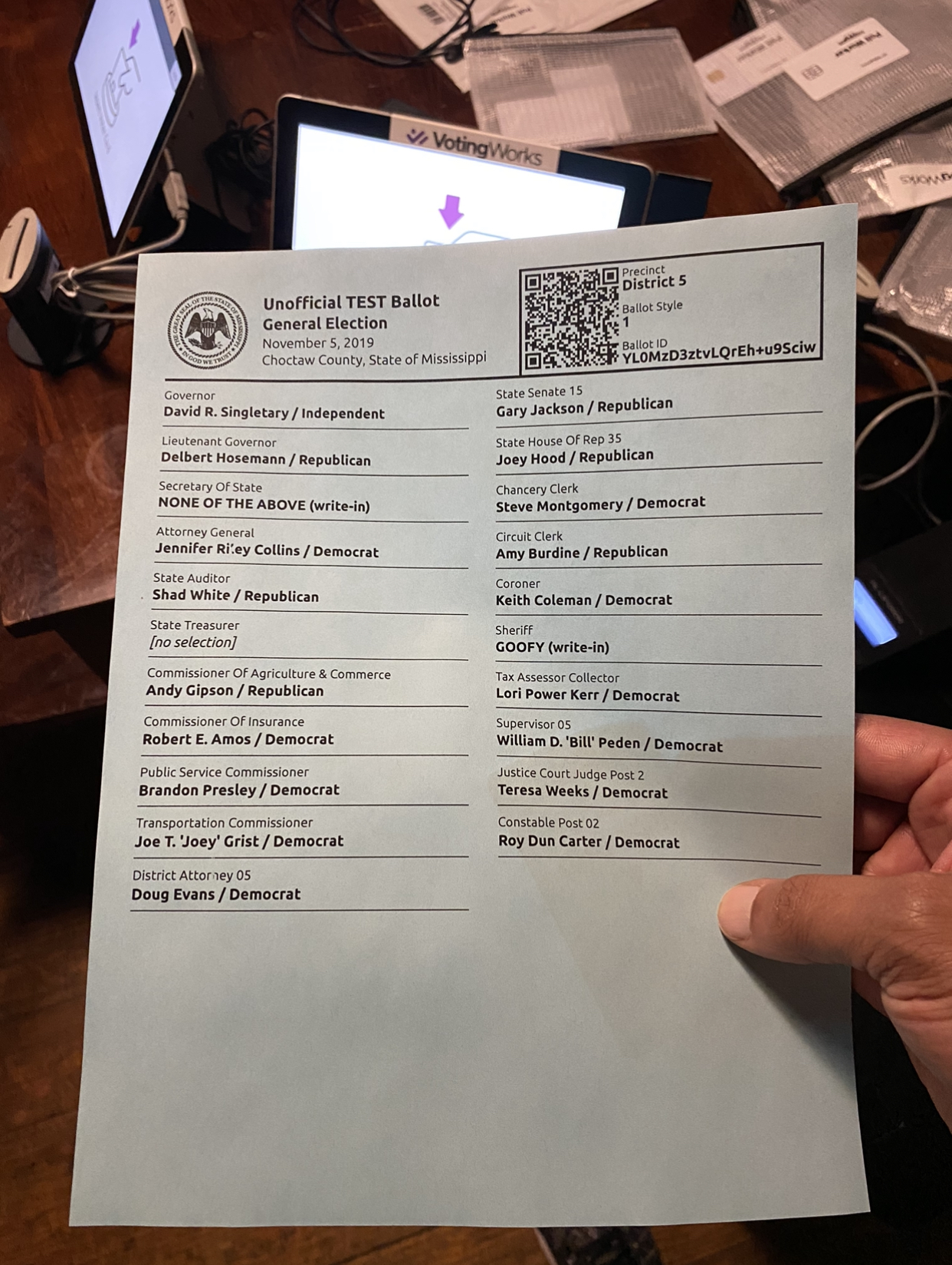 The election day experience was different for voters, poll workers, and county staff. As with every election, this election was not perfect. During my time observing voters at most of the County’s polling locations, I came away with the impression that voters adjusted to the new process and machines fairly quickly. Voters told me “it was easy, I had no trouble” and “I like that I can read the paper and spoil it if it isn’t right”. Some of the BMDs became unresponsive and required a reboot to continue. During that time, voters were able to move their card to a different BMD and continue where they left off. A seamless fail-over process is good, but voters should not be expected to treat BMDs like old desktop computers. Poll workers showed some confusion during the setup process. The introduction of new equipment meant reconsidering how the voters would flow from check-in to ballot drop. The biggest difference that I saw was during the tabulation process when the ballots were scanned so quickly that only one scanner was needed to handle all of the Voting Works ballots, while absentee ballots were scanned with the Dominion equipment. One county staff member said “end of the night closing was amazing”. I was heartened to see that most folks quickly forgot about the new machines and instead went on about catching up with family and friends at the church, fire house, or community center. ProPublica has more in-depth look at Choctaw County’s election. 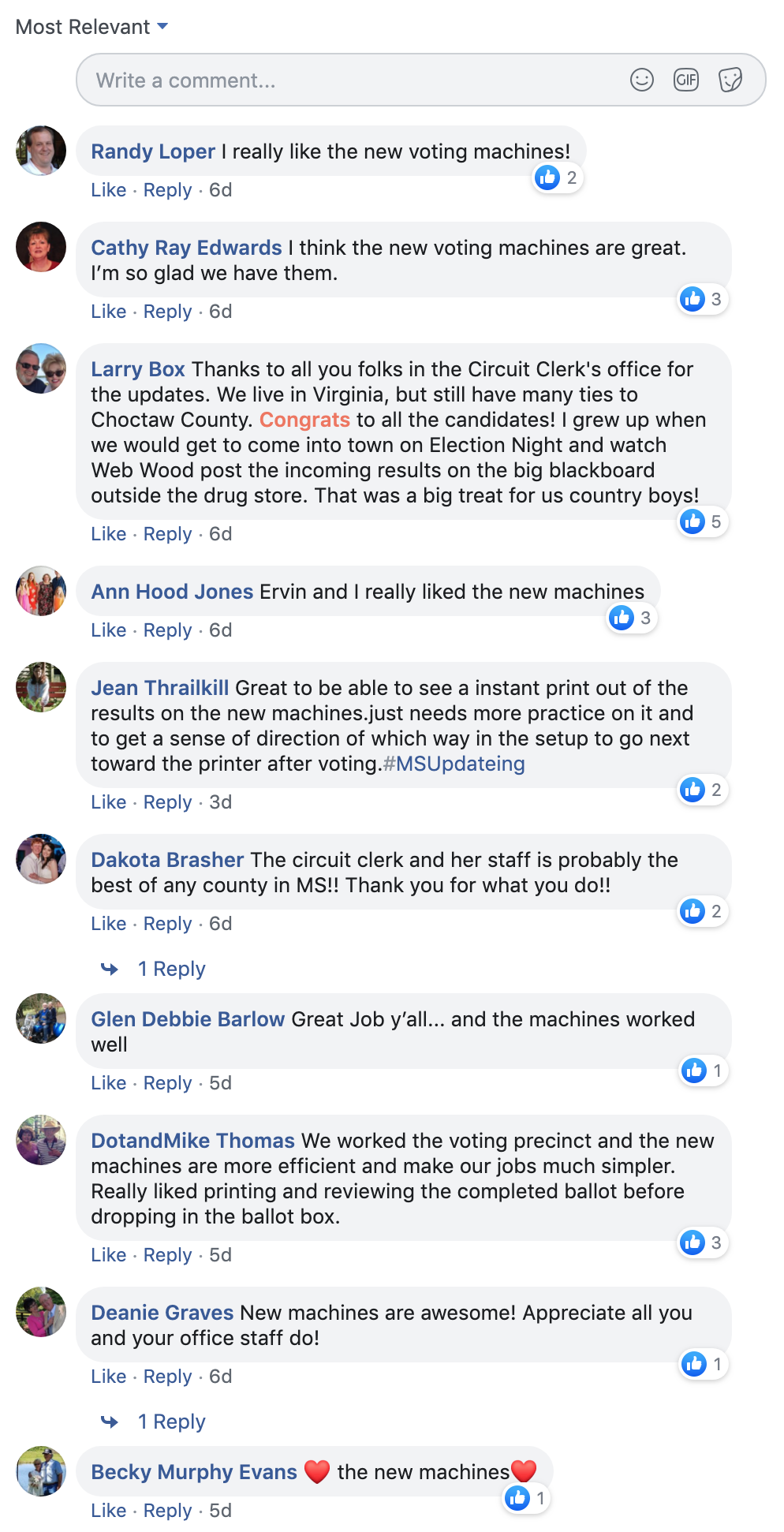 What is even more heartening about this initial success from VotingWorks, is that its solution is a departure from the typical election vendor model. The non-profit uses a combination of open source software and commercial off-the-shelf hardware designed with security, accessibility, and accountability from the start. CDT shares the vision of VotingWorks to bring down the cost of elections while increasing both security and adoption of risk-limiting audits.

Still, more work needs to be done and the federal government should provide more funding for election security. With additional funding and updated security requirements more vendors (new and established) can move toward hardware and software deployments that strike a more compelling balance of ease of use, flexibility, efficiency, and security at a lower cost within agile development and certification environments.

And while it appears as if malicious actors were suspiciously quiet in the 2019 election cycle, it’s possible they decided to delay their attacks on election infrastructure until next year. Not to say that any election is unimportant, but to paraphrase Animal Farm: some elections are more equal than others.